ROME, February 13, 2017 – In an odd note without explanation placed on the Vatican's daily press briefing today, the Council of Cardinals, a group of 10 Cardinals which Pope Francis has delegated to work with him on reform, has pledged allegiance to the Pope. 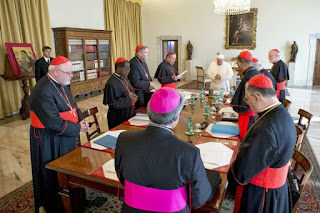 “In relation to recent events, the Council of Cardinals pledges its full support for the Pope’s work, assuring him at the same time of its adhesion and loyalty to the figure of the Pope and to his Magisterium,” said the note. The statement comes in the wake of two public expressions of dissatisfaction or concern with Pope Francis that hit the streets of Rome in the last week. The first was a poster campaign which saw dozens of large posters plastered around the city. They noted Francis’ dismantling congregations, removing priests and more, and asked in conclusion, “Where is your mercy?” The second was a satirical version of the Vatican newspaper L’Osservatore Romano painting the Pope as answering the dubia with ‘yes and no’ to each question. Cardinal Marc Ouellet, prefect of the Congregation for Bishops, last week criticized the poster campaign as a "work of the devil." However, the Cardinal was criticized for his condemnation of the public expression of the faithful given that he has direct access to the Pope, whereas the laity do not. Responding to his criticism of the poster campaign, blogger Hilary White, LifeSite’s former Rome correspondent, said: “Really? They’re not the methods we’re supposed to use? What would your eminence suggest? Dubia, perhaps? Formally submitted by the lawful authority and in accordance with the requirements of Canon Law? How’s that working out?” The Council of Cardinals' statement of allegiance would seem to suggest that public campaigns are more effective at reaching the Pope than the many official complaints of Cardinals, Bishops, priests, and faithful.